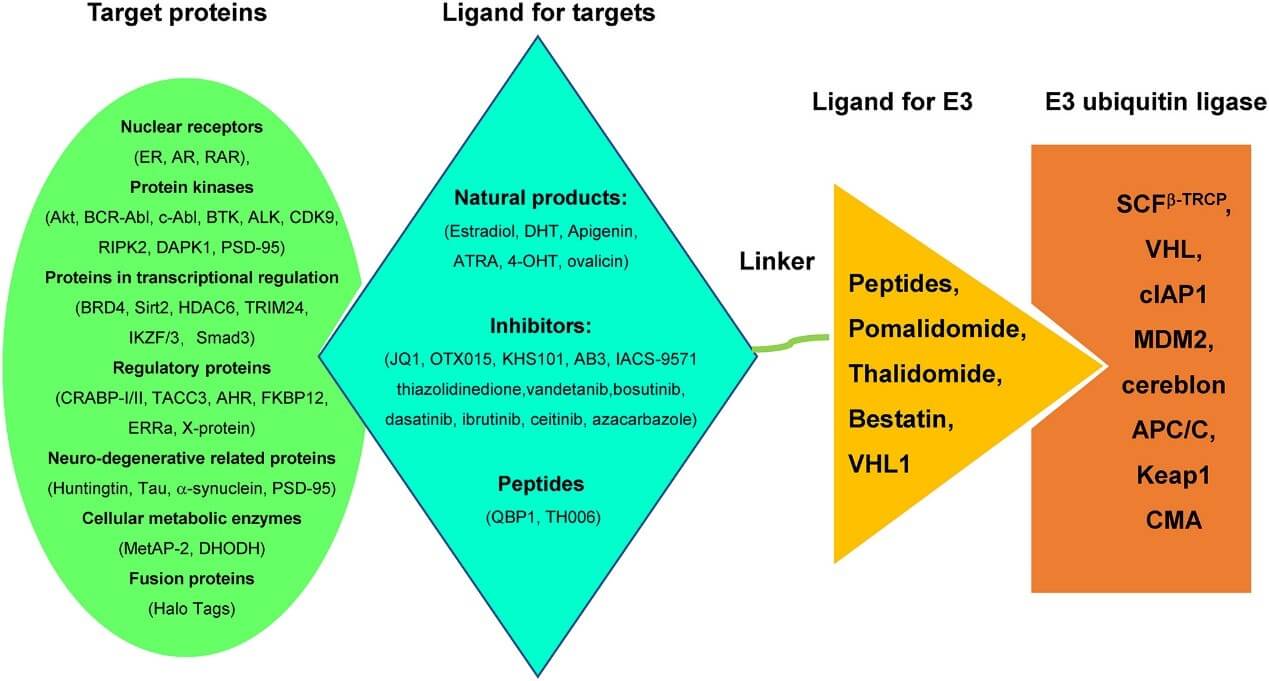 Based on the human genome, scientists predict more than 600 E3. But so far, only a few have been proven or used for the development of PROTAC: especially E3 containing VHL, CRBN, MDM2, and cIAP1, because they all have small molecular ligands bound to them. The first generation of PROTAC relied mainly on peptides. Recently, small molecule-based Protacs have been developed. The discovery of the specific small-molecule ligands for E3 ligase, such as thalidomide and its derivatives, has enabled the use of CRBN-containing E3 ubiquitin ligase to degrade the target protein IKZF1 / 3. Various Protacs have been reported to effectively target the degradation of proteins of interest. For example, BRD4 and BTK can be hijacked by Protacs to E3 containing VHL or CRBN, labeled with ubiquitination, and then degraded.

Recent studies have shown that the intrinsic activity of E3 conjugating ligands can be exploited in PROTAC designs. For example, PROTAC, which targets the degradation of BRD4, uses nutlin derivatives as E3 conjugating coordination, and uses MDM2 to degrade BRD4. The results show that the PROTAC is dual event-driven, which can induce the degradation of BRD4 and up-regulate the level of tumor suppressor p53, and has a synergistic anti-proliferative effect in several cancer cell lines. Utilizing this property of conjugating MDM2 ligands can develop PROTAC with low nanomolar potency. MDM2-Protacs have the highest MW and are the most lipophilic of PROTAC. In addition, the three aromatic rings in the MDM2 ligand part, coupled with high lipophilicity and high the number of rotatable bonds (nRotB), suggests that oral absorption of such compounds would be a significant obstacle.

Ligands that conjugate to IAP-containing E3 ligase have also been reported to induce efficient degradation of target proteins. Early IAP-PROTAC used the bestatin ligand, but these compounds were inefficient in degrading the target protein. Recently, a series of Protacs designed using LCL-161 derivatives have been reported to degrade multiple target proteins, including BRD4, ABL, AR, and estrogen receptor alpha (ERα). Protacs in this sub-family are named SNIPERs (specific and nongenetic IAP-dependent protein erasers). Further optimization of the E3 conjugating ligand resulted in ERα degrading agent 6 (A1874), which was 5 times more active than in vivo and in vitro.