When scientists find potentially dangerous proteins in cells, they may imagine downsizing themselves to be a mini surgeon, entering the cells and removing only problematic protein molecules to keep the healthy cells intact. In a new study, researchers from Stanford University in the United States pointed out that although dexterous hands and sharp instruments can never remove a single protein from the cell surface, but a new molecular tool could make cell surgery easier. The results of the study were published in Nature in July, 2010, entitled "Lysosome-targeting chimaeras for degradation of extracellular proteins".

The authors have developed a new class of molecule that can shuttle unwanted proteins from the cell surface or surrounding environment to lysosomes, which are cell chambers dedicated to protein degradation. These molecules are called lysosome targeting chimera (LYTAC), and they work by tagging proteins selectively to determine the fate of proteins and degrade them into cellular waste. This selective degradation could help study and treat diseases such as cancer and Alzheimer's disease, which are linked to surface proteins. "It's like a molecular scalpel. This tool allows you to speed up the natural degradation of certain proteins in all proteins inside or outside the cell," said the first author Steven Banik, a postdoctoral fellow in Professor Carolyn Bertozzi's laboratory in School of Humanities, Stanford University.

Proteins are essential for many biological processes, such as metabolism and cell-to-cell communication, but some proteins also help the spread of diseases (such as cancer) and escape immune regulation. When the protein works, other cellular components can stay in its active site. Traditional methods of blocking these bad proteins involve the use of drugs that block the active sites of proteins by moving atoms. However, this blocking strategy is not perfect because sometimes the binding pocket is too shallow and the inhibitor is ejected too quickly. At other times, the activity of the protein comes from its physical properties such as its rigidity, rather than from any active site, so it is not enough to block a small portion of the whole protein. In these cases, removing the protein from the cell is the only option.

Since the proteolysis targeting chimera (Protac®) was developed 20 years ago, protein degradation has been particularly popular as a therapeutic strategy. Protac®'s search and labeling intracellular proteins for subsequent degradation has been successful in research laboratories and early clinical studies, but they rely on a degradation pathway that is inaccessible to about 40% of proteins located on or outside of the cell membrane.

"My lab has always been interested in what happens on the surface of cells, including proteins that are important for immune regulation. We have identified many cell surface proteins and secretory proteins that we believe to have a pathogenic role in cancer, and LYTAC can help us better understand them and explore them as drug targets. " said Bertozzi. 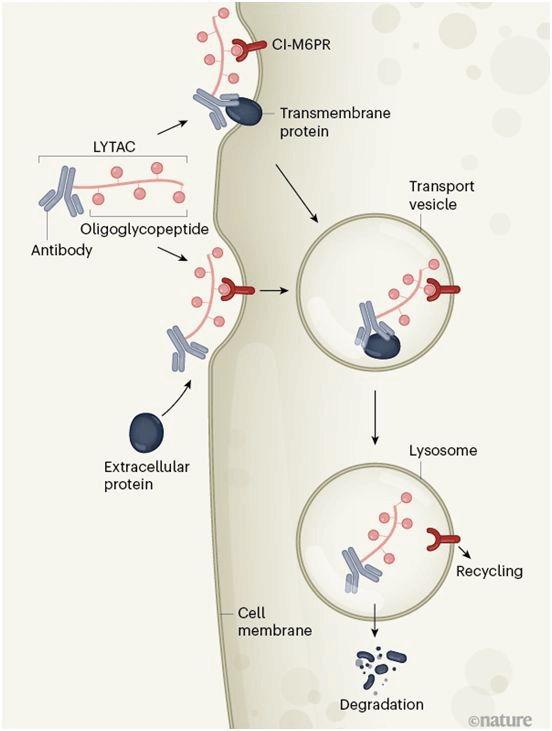 The key to making this tool work is its dual-function design. One side of the LYTAC molecule can be customized to bind to any protein of interest, and the other side is a short amino acid sequence, or peptide, embedded with a sugar called mannose-6-phosphate.

This sugar is used as an accounting label for cells. When a cell contains proteins that are sent to lysosomes for degradation, it adds the sugar to ensure that they reach their destination. "Mannose-6-phosphate works like a zip code," said Banik. “This sugar tells the cell 'I'm going to take this protein to the lysosome. Please send me there." Receptors on the cell surface interact with the sugar, and when they grab the LYTAC molecule and pull it into the cell, the labeled protein is dragged into it.

In the process of attaching tags to proteins, LYTAC hijacks a natural cell shuttle mechanism designed to escort newly synthesized lysosomal proteins to their new homes. However, lysosomal proteins are tough enough to survive the degrading enzymes encountered in lysosomes, while most proteins cannot, so those labeled by LYTAC are usually destroyed.

The LYTAC molecule consists of an oligosaccharide peptide group (which binds to the cell surface receptor CI-M6PR) and an antibody that binds to specific transmembrane or extracellular proteins. The antibody can also be replaced by a small protein-binding molecule. When it binds to CI-M6PR and target protein at the same time, the resulting complex will be swallowed by the cell membrane to form transport vesicles, which brings the complex to the lysosome, an organelle that contains protein-degrading enzymes. The target protein is degraded and the receptor CI-M6PR is recycled. It is not clear whether the LYTAC molecule itself is also degraded. LYTAC has potential value in treating diseases.

The researchers confirmed that LYRAC can target and degrade proteins in cells that play an important role in Alzheimer's disease and cancer. The protein tethered end of LYTAC can be anything that binds to proteins, such as antibodies or existing drugs, so many other proteins can be targeted in the future.

"With protein degradation strategies, you can not only increase the number of target cells that drugs can target (druggable), but also improve existing treatments. Every cell has lysosomes. Every cell already has a way to degrade proteins. No matter what your target is, if LYTAC is available there, it can be degraded." said Bertozzi.