As a leading CRO in the pharmaceutical industry, BOC Sciences provides customized PROTAC design services for various targets. The bifunctional PROTAC compounds are useful as modulators of targeted ubiquitination with respect to Interleukin-1 receptor-associated kinases 4 (IRAK4), which is degraded by these compounds. IRAK4 is an emerging target for PROTAC molecules against multiple diseases, including hematologic malignancies and autoimmune diseases. With extensive expertise and comprehensive platform, we provide PROTAC molecules design services to target IRAK4.

IRAK4 overactivation is linked with several autoimmune diseases. Activation of the IRAK4 pathway triggers an inflammatory chemokine and cytokine cascade that is important in innate immunity. Therefore, Inhibition or elimination of IRAK4 blocks pro-inflammatory cytokine production in humans and represents a promising therapeutic approach in autoimmune disease, such as rheumatoid arthritis, hidradenitis suppurativa. In addition, cell intrinsic and extrinsic perturbations to inflammatory signaling pathways are a hallmark of development and progression of hematologic malignancies. Thus IRAK4 is considered as a promising therapeutic target for diffuse large B-cell lymphoma (DLBCL). 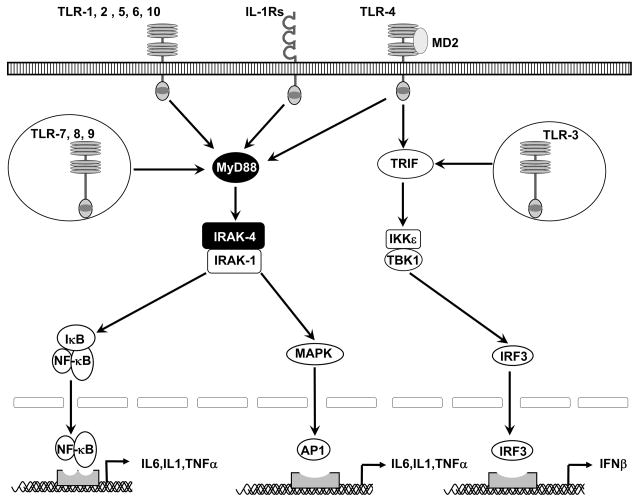 In addition to the kinase activity of IRAK4, studies have shown that the scaffolding function of IRAK4 plays an important role in the MYD88-IRAK4-NFκB signaling pathway. Several potent and selective inhibitors of IRAK4 have been reported in the literature. However, inhibiting IRAK4 kinase activity alone by these inhibitors may not be sufficient to produce a therapeutic effect due to the role of IRAK4 as both a scaffolding protein and an active kinase. Unlike conventional inhibitors that only inhibit IRAK4 kinase activity, PROTAC degraders of IRAK4 may eliminate both the kinase and scaffolding functions, providing a more potential approach to treat autoimmune, inflammatory, and oncological diseases.

Study reported a small molecule PROTAC using the Von Hippel Lindau (VHL) E3 ligase ligand in 2019, achieving potent intracellular degradation of the kinase IRAK4, with a DC50 of 151 nM in PBMC cells. Yun Chen, et al. have reported a PROTAC molecule that potently degrades kinase IRAK4 in OCILY10 and TMD8 cells in 2020. The IRAK4 PROTAC shown a substantial advantage in inhibiting the growth of cell lines expressing the MYD88 L265P mutant compared with the IRAK4 inhibitor.

Currently, there are two IRAK4 PROTAC compounds in clinical development, KT-474 and KT-413. KT-474 is the first IRAK4 degrader, and first PROTAC outside of oncology, to enter clinical development. Compared to monoclonal antibodies targeting single cytokines, KT-474 is designed to block TLR/IL-1R-mediated inflammation more broadly and achieve superior pathway inhibition to IRAK4 inhibitors by abolishing both the kinase and scaffolding functions of IRAK4. KT-413 is being developed initially for the treatment of MYD88-mutant DLBCL, with the potential to expand into other IL-1R/NFkB malignancies. KT-413 is currently in preclinical development.

Our Services of IRAK4 PROTAC Development