As a CRO, BOC Sciences provides PROTAC design services for various targets. Abnormal activation of PI3K is one of the most common oncogenic events in human cancers. Proteolysis targeting chimera (PROTAC) is a novel technology that could be used to induce PI3K kinase degradation with cancer therapeutic potential. With extensive expertise and comprehensive platform, we provide PI3K-based PROTAC design services for drug development.

Phosphatidylinositol 3-kinase (PI3K) signaling regulates cell proliferation, survival and metabolism. PI3K has phosphatidylinositol kinase activity as well as serine/threonine (Ser/Thr) kinase activity. PI3K can be classified into class Ι, class ΙΙ and class ΙΙΙΙ according to its structure and substrate specificity, among which class Ι is the most closely related to tumors and has been most studied. This class of PI3K is a heterodimer, consisting of a regulatory subunit p85 and a catalytic subunit p110. There are four types of catalytic subunits, p110α, p110β, p110δ, and p110γ, encoded by the PIK3CA, PIK3CB, PIK3CD, and PIK3CG genes, respectively.

PI3K catalyzes the synthesis of the second messenger phosphatidylinositol (3,4,5)-trisphosphate (PIP3) by phosphorylating phosphatidylinositol 4,5-bisphosphate (PIP2), which can be converted to PI(3,4)P2 after dephosphorylation of the 5′-position. PIP3 and PI(3,4)P2 function as second messengers downstream of class Ι PI3K by interacting with in a variety of proteins, including protein kinases (e.g., AKT, BTK), bridging proteins, and small GTPase proteins. Phosphatase and tensin homolog (PTEN) inhibit class Ι PI3K signaling by dephosphorylating PIP3 and PI(3,4)P2. PTEN deletions, nonsense and missense mutations are common in many cancers, including prostate and breast cancers, glioblastoma and melanoma. 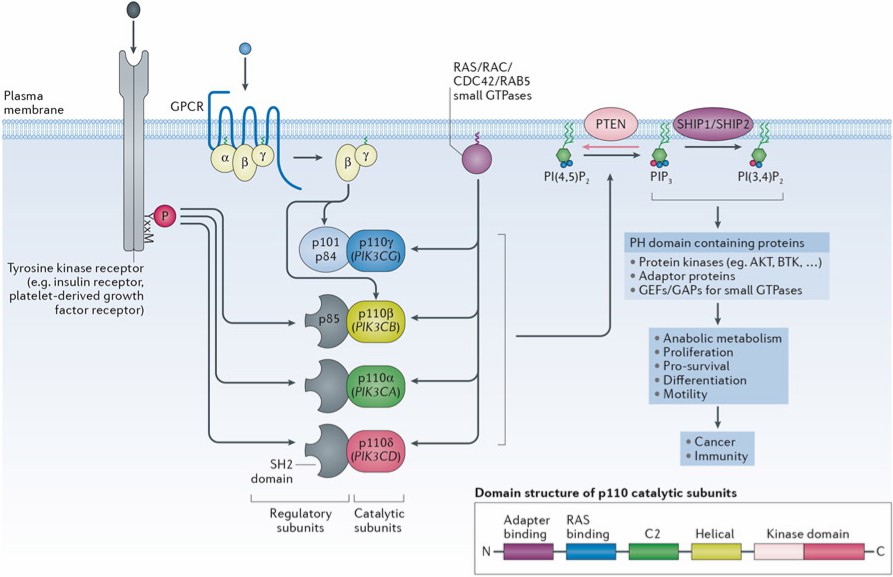 Why Develop PROTAC for Targeting PI3K?

A common mechanism of PI3K activation in cancer is mutations in the PIK3CA gene. PIK3CA mutations are most commonly seen in gynecologic malignancies, breast and head and neck cancers, and other tumor types including lung, bladder, and colorectal adenocarcinomas, as well as overgrowth syndromes, often also carry PIK3CA activating mutations.

Although PI3K-AKT is a classical tumor pathway and the development of PI3K inhibitors has been a hot topic of research, only a few PI3Ks have actually been approved for marketing. Several issues limit the efficient use of PI3K inhibitors, such as:

The advantages of developing PROTACs to target PI3K:

PI3K are potential anticancer targets and drugs that inhibit them are preferred in chemotherapy. PROTAC is a new technique for degrading a given target protein using the ubiquitin-proteasome system. The PROTAC molecule consists of three parts: a ligand recruiting E3 ligase, a target protein-binding ligand, and a linker connecting the two ligands. The degradation of PI3K by PROTAC based on CRBN and VHL, two of the most widely studied E3 ligases, has been reported. The PI3K PROTACs are designed with the idea of using highly active PI3K inhibitors as protein targeting units linked to E3 ligands through different linkers. PI3K PROTACs were reported to be developed by combining pomalidomide (CRBN ligand) and piperazine derivatives (PI3K inhibitor) using different linkers. Many of these compounds significantly inhibit PI3Ka and have IC 50 values up to nanomolar levels.