As a leading CRO, BOC Sciences provides the one-stop services for PROTAC molecular drug discovery. We have the ability to design effective PROTAC molecules to accelerate our customers’ new drug development. Based on the extensive expertise in drug discover, we provide innovative solutions for drug discovery in synucleinopathies.

Many neurodegenerative disorders are characterized by intracellular protein aggregates that are decorated by ubiquitin and different ubiquitin ligases. Among these proteins, aggregation of alpha-synuclein (α-syn) protein is a characteristic of synucleinopathies, including Parkinson’s disease (PD) that causes unintended or uncontrollable movements, such as shaking, stiffness, and difficulty with balance and coordination. During various neurodegenerative disease, the activity of the proteasome is progressively impaired, leading to the aberrant protein aggregates, such as α-syn, which in turn binds to proteasome correlated with a reduction in protease activity. Thus, a vicious cycle between proteasome dysfunction and α-syn accumulation in PD pathogenesis.

The causative role of α-syn in the pathogenesis of PD makes it a candidate therapeutic target for this disease. PROTAC technology, a degradation strategy, involving the ubiquitin-proteasome system could be a potential therapeutic strategy to eliminate the α-syn protein. PROTACs are bifunctional molecules that could simultaneously bind to the E3 ligase and target protein, in this case α-syn, which promotes the target protein polyubiquitination, leading to subsequent proteasomal degradation. Due to PROTACs with event-driven mechanism of action, some proteins considered undruggable can be selectively degraded by these molecules. The likelihood of successful PROTAC development represents a promising strategy to advance the understanding of neurodegenerative disease and translate those insights into therapies.

In the field of neurodegenerative diseases, PROTAC technology may offer clear advantages over current therapeutic agents for targets including α-syn. A key PROTAC property is the ability to degrade proteins that are not classically targetable by small-molecule inhibitors because they lack active sites. A peptide-based α-syn degrader has been reported and was shown to protect neurons from α-syn overexpression-induced toxicity. Compared to small-molecule target protein binders, the use of peptides has been limited due to the lack of a strong binder as well as the cell permeability issue of the peptide-based strategy.

To develop the cell-permeable PROTAC, a fusion peptide for α-syn was synthesized by Qu et al. This compound consists of three parts: a cell-penetrating moiety, α-syn binding ligand, and proteasome targeting motif. This peptide-based degrader could penetrate into cells and consequently suppress the cellular α-syn level through proteasome degradation in a dose- and time-dependent manner, rescuing mitochondrial dysfunction and cellular defects caused by α-syn overexpression in primary neurons.

The mechanism of action is as follows: 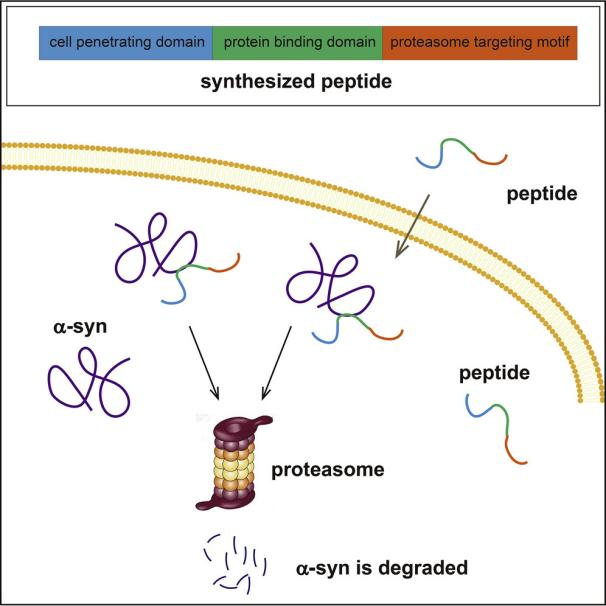