E3 ubiquitin ligase based on the ubiquitination degradation pathway has potential application value in the study of protein structure, function, and distribution. For example, E3 is involved in PROTAC-related research to target the degradation of pathogenic proteins. In addition, some E3 ligases have been reported to be novel biomarkers for certain diseases such as COVID-19. These studies indicate that E3 ligase is closely related to the occurrence and development of cancer.

E3 ligase is distributed in many organs, cells, and subcellular compartments. Compared with E3 ligases distributed in other sub-cells, membrane-associated E3 ligases are more important in membrane organelles and play a crucial role in maintaining membrane morphology and function.

The endoplasmic reticulum (ER) is the transport system of eukaryotic cells and its main function is to synthesize proteins and lipids. Studies have shown that endoplasmic reticulum stress is closely related to the occurrence of cancer. Because of its significance in the metabolism of the endoplasmic reticulum, E3 ligase distributed in ER is crucial for the development of cancer. Gp78, TRIM13, and PARK2 are common E3 ligases distributed in ER that mediate carcinogenic effects through many different pathways, including cell proliferation, apoptosis, tumor angiogenesis, cell cycle disruption, cell metastasis, and mitochondrial function. 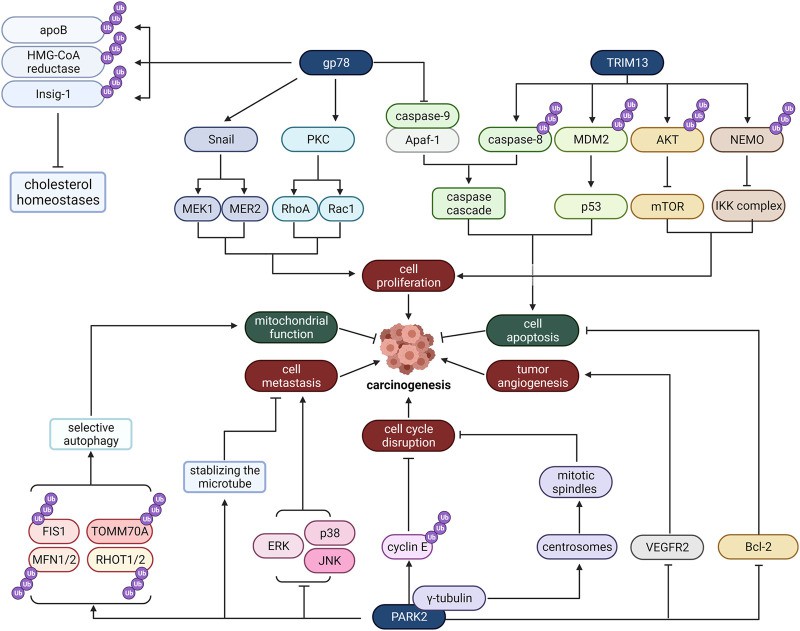 Gp78, also known as the autocrine motility factor receptor (AMFR), was originally found in B16-F1 melanoma cells. Gp78 has been found to promote tumor metastasis and migration. The ligand of Gp78 is AMF, and Gp78 is activated in response to the stimulation of AMF and then alters cell adhesion, proliferation, motivity, and apoptotic activity by activating downstream signaling pathways. In addition to being a receptor, Gp78 can also act as an E3 ligase to ubiquitinate and degrade some proteins. Therefore, Gp78 can work in the proteasomal degradation of endoplasmic reticulum-associated proteins.

TRIM13 is a tumor suppressor gene whose deletion is common in many malignancies. Its mRNA and protein expression is reduced in non-small cell lung cancer (NSCLC) tissues and cell lines. TRIM13 mainly distributes in the ER membrane, mediates the degradation of ER-related proteins, and regulates autophagy induced by ER stress. So far, caspase-8, MDM2, Akt, and Nur77 have all been identified as TRIM13 substrates, and some findings reveal that these substrates are involved in tumor cell apoptosis and proliferation. TRIM13 can induce ubiquitination of caspase-8, leading it to its transport to the autophagosome and activation, thus inducing cell apoptosis. In addition to caspase-8, TRIM13 forms a complex with MDM2 that negatively regulates tumor suppressor p53 and AKT to induce apoptosis. As a result of their interaction, MDM2 and AKT are ubiquitinated and degraded by the proteasome to increase the stability of p53 and reduce AKT kinase activity, thereby inducing apoptosis.

Studies have shown that SYVN1 can inhibit the growth and metastasis of breast cancer through the mir-96-5p/syvn1 axis. It interacts with IGF-1R to promote its ubiquitination and degradation, thus inhibiting the growth, migration, and invasion of breast cancer cells. In addition, SYVN1 can interact with heat shock protein 90 and promote ubiquitination of eEF2K to inhibit tumor cell proliferation. Some studies have shown that abnormal tumor cell metabolism may lead to ER damage and unfolded protein response (UPR). Typically, incorrectly folded proteins are monitored by chaperone proteins to be ubiquitinated by E3 ubiquitin ligase and degraded by the proteasome. Therefore, ER function is essential for cancer cell survival.

The plasma membrane not only regulates the flow of substances into and out of cells but also protects the integrity of cells and maintains their morphology. Numerous studies have demonstrated that frequent mutations of plasma membrane-associated E3 ligase can lead to cell carcinogenesis. RNF34, REFL, and NEURL1 are three E3 ligases distributed in the plasma membrane. They regulate carcinogenic effects through a variety of pathways, including cell growth and proliferation, migration, cell transfer, apoptosis, inflammatory, and immune responses. 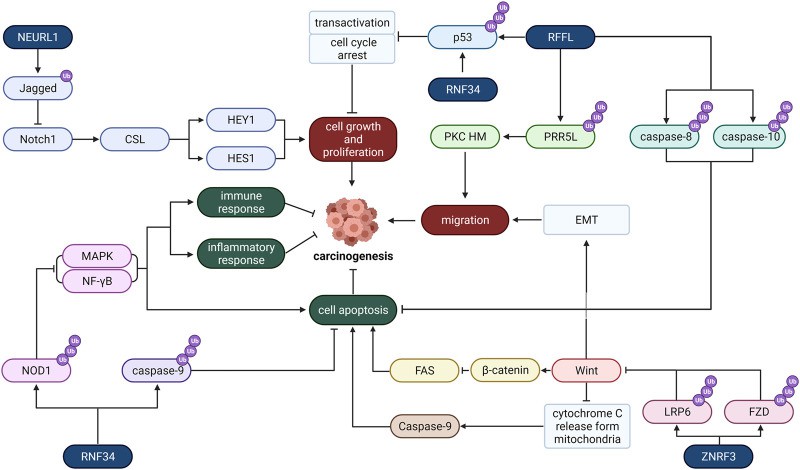 Fig 2. Mechanism of E3 ligase located in the plasma membrane

Belonging to the CARP family, RNF34 can induce ubiquitination and degradation of death-effector domain (DED) caspase, thereby inhibiting the apoptosis of cancer cells. Moreover, RNF34 can inhibit the apoptosis of cancer cells by regulating the NOD1 pathway. NOD1 can not only induce apoptosis, but also control cell proliferation. Activation of NOD1 can lead to caspase-8 and caspase-9-induced apoptosis. In addition, RNF34 also stimulates the degradation of p53 and blocks the activation of reverse transcription, which means that it can also regulate the cancer cell cycle and accelerate cell growth and proliferation.

RFFL, a member of the CARP-2 family, is an E3 ubiquitin ligase with a ring finger structure. Studies have shown that RFFL can inhibit the expression of p53 and promote the proliferation of cancer cells. In addition, RFFL plays a key role in cell migration. RFFL can induce ubiquitination and degradation of PRR5L, leading to MTORC2-mediated phosphorylation and activation of PKC, which can promote tumor cell migration. Therefore, RFFL may be a potential target to promote tumor migration and metastasis.

Neuralized-like 1 (NEURL1) is a tumor suppressor. At present, the subcellular localization of NEURL1 has not been determined. NEURL1 has been shown to significantly down-regulate protein levels through histone modification and has demonstrated a variety of tumor inhibitory functions, including promoting apoptosis and inhibiting tumor growth, angiogenesis, and invasion, mainly through the regulation of the Notch signaling cascade. In addition, NEURL1 can function as an E3 ubiquitin ligase by ubiquitinating the extracellular domain of membrane-bound protein Jagged1 and triggering the endocytosis and degradation of Jagged1. Reduced Jagged1 level will weaken the signal transduction between Jagged1 and the receptor Notch1 on the surface of adjacent cells. Inhibition of the Notch1 signaling pathway will down-regulate the transcription initiation of various cell cycle-related proteins, including HES1 and HEY1, thus inhibiting the growth and proliferation of tumor cells.

Zinc And Ring Finger 3 (ZNRF3) is located on the plasma membrane and is often associated with the development of cancer. ZNRF3 regulates Wnt/β-Catenin signaling associated with cancer. Wnt stabilizes β-Catenin, which contributes to the formation of TCF/β-Catenin complexes and the regeneration of other coactivators to promote oncogene activation, such as c-MYC and cyclin D1, leading to the development of cancer. However, ZNRF3 can reduce the activity of the Wnt pathway and inhibit the proliferation of cancer cells by promoting the degradation of the Wnt receptor.

Cbl protein mainly exists on the surface of the cell membrane and plays an important role in tumorigenesis and anti-tumor immunity. Cbl expression has been reported to be associated with human colorectal cancer by inhibiting the migration of lung cancer cells and glioblastoma cells. Cbl-mediated ubiquitination can alter the cellular localization of proteins to regulate their function. First, it acts as an E3 ligase, activating the negative regulatory signal of RTK, and ubiquitinating and degrading RTK (receptor tyrosine kinase). Therefore, Cbl deficiency may lead to the development of malignant tumors and immune dysfunction.

The main function of the Golgi apparatus is to process, sort, and transport the proteins synthesized by the endoplasmic reticulum, and then send them to specific parts of the cell or secrete them outside the cell. The Golgi apparatus is particularly important for secreting proteins, and its important function of regulating metabolism mainly depends on the fluidity of the membrane and the abundance of anchor proteins. It has been reported that E3 ligase located in the Golgi apparatus is closely related to tumor hypoxia response and cell apoptosis. KLHL20 is an important Golgi-mediated E3 ligase that regulates cell carcinogenesis through a variety of pathways, including metabolic reprogramming, cell metastasis, tumor angiogenesis, and tumor growth. KLHL20 forms an E3 ligase complex with Cul3 and Roc1, which induces ubiquitination and degradation of substrate proteins such as PML and DAPK, thereby inhibiting apoptosis. 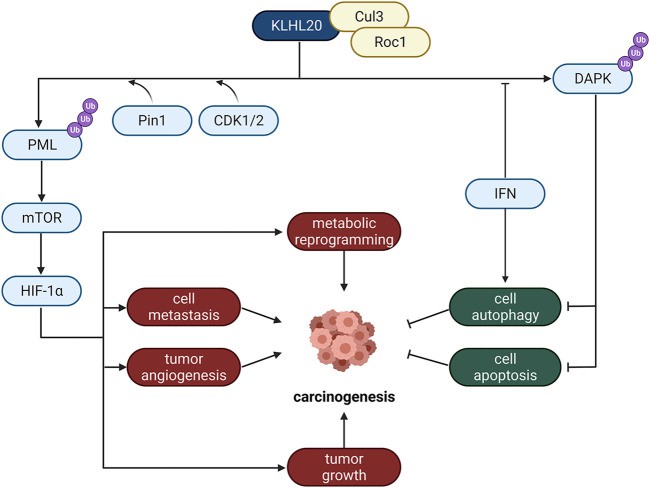 PIR2/RNF144B is an E3 ubiquitin ligase located in the mitochondrial membrane and a potential targeted biomarker for endometrial cancer. Studies have shown that PIR2 can promote cancer cell growth and proliferation.

ITCH is mainly located on the cell and nuclear membrane, and its substrates are mainly divided into two categories: transcription factors and cell growth factors, such as EGFR/ERbB family member erBB-4. Ubiquitination and degradation of these substrates affect cell growth, differentiation, and apoptosis, and are associated with the malignant transformation of tumors.

Smurf1 and Smurf2, E3 ubiquitin ligases distributed in the nuclear membrane, inhibit the TGF-β pathway by ubiquitinating and degrading smad and transforming growth factor-β (TGF-β) receptors. In addition, due to differences in post-translation regulation, the functions of smurf2 and smurf1 are also different. Smurf1 can regulate cell movement by promoting ubiquitination and degradation of RhoA, and Smurf2 can ubiquitinate and degrade Smurf1 to promote cell migration in vitro and bone metastasis in vivo.

In addition, the development and breakthrough of degraders such as PROTAC and molecular glue may largely depend on the in-depth study of membrane-associated E3 ligase. For example, some membrane-anchored proteins are difficult to be targeted using targeted degradation techniques, but novel strategies utilizing membrane-associated E3 ligases may facilitate the ubiquitination and degradation of these proteins.