Targeted protein degradation (TPD) is a technology that induces protein degradation of human disease targets by using cellular proteasome and lysosome pathways. One of its main application scenarios is the development of drugs targeting previously undruggable targets. Current advances in TPD technology have focused on tumor targets, and researchers are trying to extend the technology to other therapeutic areas.

Since misfolded protein polymerizations such as amyloid-beta, Tau, and α -nuclide are considered to be one of the main causes of neurodegenerative diseases (NDDs). Currently, one of research strategies in the field of NDDs is to develop effective disease modification therapies (treatment methods that effectively reduce recurrence and decrease the disease burden) by using TPD technology. TPD technologies including proteolysis targeting chimera (PROTAC), in-cell click-formed proteolysis targeting chimera (CLIPTAC), specific and nongenetic inhibitor of apoptosis protein [IAP]-dependent protein eraser (SNIPER), hydrophobic tagging, and molecular glue have the potential to degrade NDD pathological markers. 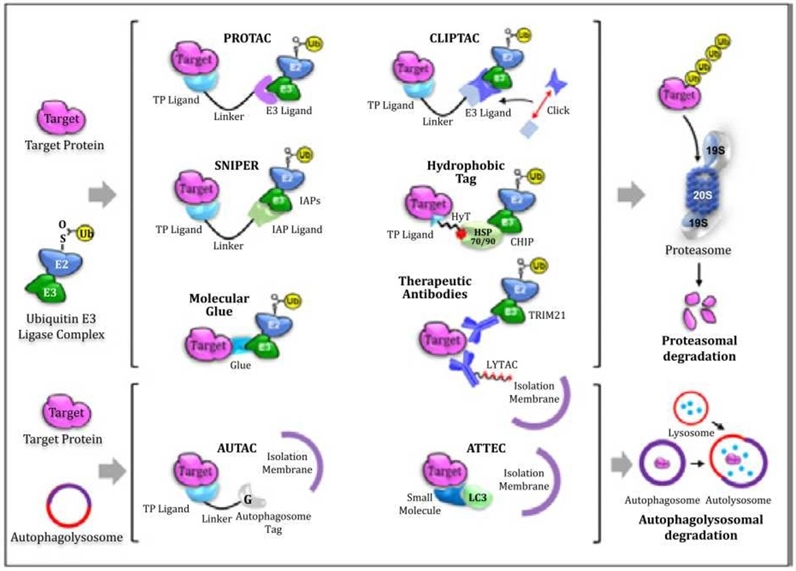 PROTAC's potential to cross the blood-brain barrier (BBB) and facilitate drug delivery (oral, intravenous, subcutaneous, and intrathecal) has attracted the attention of many pharmaceutical companies. A study reported in 2016 demonstrated that VHL E3 ligase could be recruited by PROTAC to eliminate Tau activity. Besides, PROTAC can mediate positive interactions between neuroprotective proteins and toxic proteins and prevent its oligomerization and subsequent aggregation.

CLIPTAC refers to the formation of a complete PROTAC structure in cells through cycloaddition reaction using two cellular permeable ligands with smaller polar surface area (PSA). This technology solves the problem that PROTAC has too large molecular weight and poor membrane permeability. Two precursor drugs with relatively low molecular weight can pass through the membrane smoothly.  Currently, CLIPTAC has been able to degrade tumor targets such as BRD4 and ERK1/2, while the application of this technology in the field of NDD needs to be further explored.

Fig 2. The molecular weight of PROTAC is too large, which affects its cell permeability, solubility and other drug properties. The complete CLIPTAC molecule was formed by the bioorthogonal click chemistry of CLIPTAC precursor in the cell. (Lebraud, 2016)

SNIPER is a kind of small-molecule protein deactivating agent which is composed of the ligand of IAPs and the ligand of the target protein. Unlike PROTAC, these molecules can exploit the E3 ligase properties of IAPs to induce the ubiquitination of target proteins, which can be degraded by proteasomes.

Hydrophobic tagging technology (HyT) involves binding a hydrophobic label such as diamantane or Boc3Arg (a tert-butyl carbamate protected arginine) to a ligand and subsequently inducing structural changes in the target protein to expose the internal hydrophobic group. Haloalkane dehalogenase enzyme (Halo-TAG) fusion protein technology was first reported in 2008. This technique allows the development of HyT protein degraders with chloroalkyl groups at one end and low molecular weight hydrophobic groups at the other end. The bifunctional HyT can assist molecular chaperone, such as Hsp70 and Hsp90, recognition of target proteins, and bind to C terminus of Hsc70-interacting protein (CHIP, a newly discovered co-chaperone with ubiquitination ligase activity, u-box structure at c-terminal), and degrade target protein after ubiquitination of target protein.

The molecular glue can promote the binding of the target protein to E3 ligase and induce proteasome hydrolysis. Because the drugs do not require binding pockets on target proteins, they can target "undruggable" targets. In addition, the non-stoichiometric mechanism of action and the ability to degrade non-enzymatic proteins of this drug have bright prospects for development, especially in the anti-tumor field. The drug also has broad promise in degenerative diseases and some serious diseases (cystic fibrosis, diabetes, inflammation, and various neurological disorders).

In conclusion, TPD technologies such as molecular glue and small molecule PROTAC have certain advantages, but they still need to be further developed to improve the efficacy and drug-like properties of various technologies. There are still some obvious problems that need to be solved with this kind of technology. For example, due to the specificity of UPS protein expression and the development of related ligands, the current suitable targets and cell types of TPD are limited. In addition, relatively large molecular weight and structural complexity resulting in poor drug-like properties. Furthermore, whether drug resistance, which is found in the process of tumor TPD, will also appear in NDD due to the need to target several specific proteins.