Receptor tyrosine kinases (RTKs) play key roles in signaling pathways that regulate intercellular communication and control essential cellular processes. Thus, dysregulation of RTK signaling contributes to a wide variety of human diseases, particularly cancer. RTKs are a subclass of tyrosine kinases and there are approximately 58 known RTKs in humans, including EGFR, HER2 and MET, all of which have similar protein structures. Under normal physiological conditions, RTKs are activated in a ligand-mediated manner to propagate cellular signals. Oncogenic mutations in RTKs disrupt this normal biological process, leading to dysregulated cell growth, abnormal cell signaling, and altered tumor cell metabolism. Overexpression of RTKs has been found in a variety of human cancers, such as EGFR in glioblastoma, lung, esophageal thyroid cancers; HER2/ErbB2 in lung, bladder, breast and gastric cancers; and MET in lung and gastric cancers. Because of the critical role of RTKs, many small molecule inhibitors or monoclonal antibodies have been developed to treat cancers and other diseases caused by mutations in RTKs. Despite these advances, acquired resistance to targeted therapies will inevitably occur. The proteolysis targeting chimera (PROTAC) technology, as a next-generation treatment, has the potential to overcome these concerns.

PROTAC is a heterobifunctional small molecule, consisting of two ligands, one for the target protein and the other for an E3 ubiquitin ligase. RTK PROTACs bind to the target (in this case RTK) and the E3 ubiquitin ligase simultaneously, which drives the polyubiquitination and the subsequent degradation of the target protein. Unlike the conventional small-molecule inhibitors, PROTACs eliminate both catalytic and noncatalytic (scaffolding) functions of the targeted enzyme. The advantages of degradation induced by RTK PROTACs over inhibition include more potent inhibition of cell proliferation, a more durable and sustained downstream signalling response, so RTK PROTACs address the kinome re-wiring challenge seen with many RTK inhibitors. Indeed, the elimination of RTK would prevent the persistence of inactive kinases as scaffolding nodes for oncogenic signaling, and this more sustained loss of function could be accomplished using PROTACs, a technique for post-translational protein degradation. 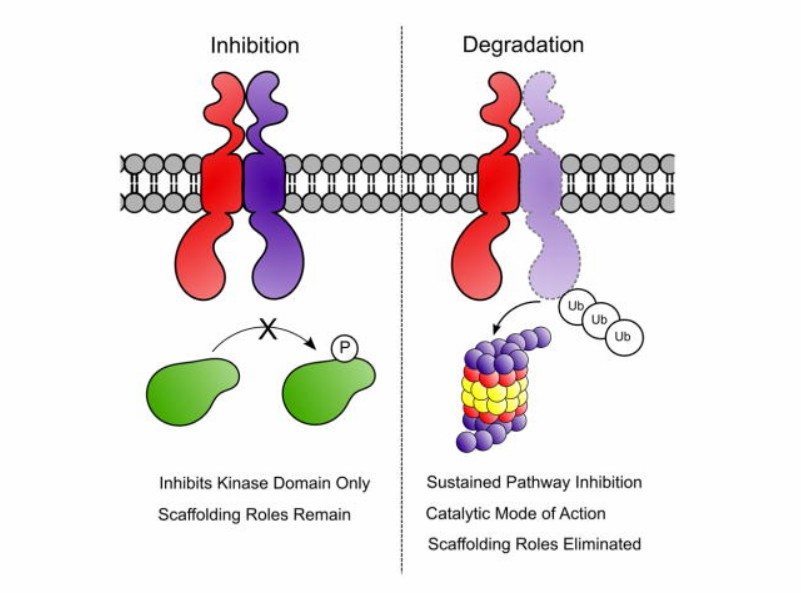 Unlike kinase activity inhibition, RTKs degradation results in complete, lasting downstream signal inactivation. PROTACs degraded several RTKs, including c-Met, HER2, EGFR, and multiple mutants of EGFR. PROTACs have many advantages such as improved physicochemical properties, reduced toxicity, and facile modular design. EGFR, as a kind of RTK, is critically associated with the regulation of cell apoptosis, proliferation, metabolism, and survival. Several PROTACs have been reported that conjugating an EGFR-binding ligand (commonly EGFR inhibitors, e. g. Gefitinib) to an E3 ligase binding ligand for EGFR degradation. EGFRL858R/T790M serves as an ideal and relatively safe target for PROTACs because it is selectively expressed in tumor cells with acquired drug resistance, but it can be found in normal cells.