MDM2 is an E3 ligase and a very promising target for cancer therapy. MDM2 is a negative regulator of the oncogenic factor p53. Traditional small molecule MDM2 inhibitors are limited in their application and there is an urgent need to develop novel targeted therapies, and MDM2-based PROTAC is one such alternative therapy. As a leading CRO, BOC Sciences provides one-stop services for MDM2-based PROTAC development to meet our clients' new drug discovery goals.

The mouse double minute 2, MDM2, is a key regulator of a variety of essential cellular processes, it belongs to a large family of RING-finger containing proteins and, like most of its other members, MDM2 functions mainly as an E3 ligase. It ubiquitinates against various substrates and controls their levels through proteasome-dependent degradation. MDM2 is also a very promising drug target for cancer therapy.

The widespread interest in MDM2 can be attributed to its ability to bind and quench the activity of the tumor suppressor protein p53. p53 functions primarily as a sequence-specific transcription factor, which is a major barrier to cancer development and progression. In normal, non-stressed cells, p53 protein levels are kept low through proteasomal degradation directed by the E3 ubiquitin ligase MDM2, a major inhibitor of p53. MDM2 is found to be overexpressed in many human cancers and represents a way in which cells inactivate p53 during tumor formation. The primary function of MDM2 is to induce the tumor suppressor p53 ubiquitination and degradation, thereby acting as an oncogenic protein to promote tumorigenesis.

To date, many small molecule inhibitors (SMIs) targeting p53-MDM2 protein-protein interactions have been developed. Although p53 is a substrate targeted by MDM2 for degradation, MDM2 is also a target of p53 and its own levels are affected by p53 upregulation. When MDM2 inhibitors disrupt MDM2-p53 binding to release p53, feedback regulation of accumulated p53 causes the accumulation of MDM2. Therefore, when MDM2 inhibitors are rapidly cleared in vivo will lead to p53 degradation, which affects the therapeutic effect of MDM2 inhibitors. In addition, the accumulation of MDM2 in normal tissues may have deleterious effects, as MDM2 itself is oncogenic.

The PROTAC consists of three parts: 1) a small molecule that specifically binds the target protein, 2) another small molecule that acts as an E3 ligand binding to the E3 ligase, and 3) a chemical linker that connects the first two parts. MDM2-based PROTACs are usually constructed using MDM2 inhibitors. There are two ways of MDM2-based PROTAC construction: 1) MDM2 inhibitor are used to block MDM2-p53 interactions and stabilize p53, as a target protein ligand, and 2) as the E3 ligand component of PROTAC for degradation of other disease-related proteins. 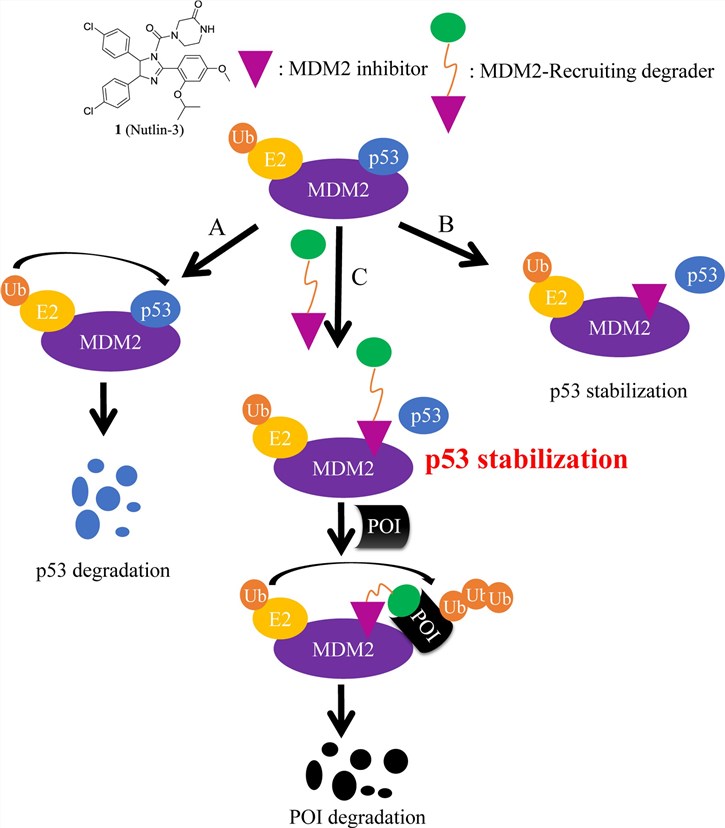 In 2019, studies reported a potent MDM2-PROTAC, WB156, which consists of a nutlin derivative and the CRBN ligand lenalidomide. Nutlin was the first small molecule inhibitor found to inhibit p53-MDM2 interactions. In leukemic cells, WB156 can effectively deplete MDM2 and activate wild-type p53, which in turn induces apoptosis. However, this molecule can only act in a limited number of leukemic cell lines. Recently, research has disclosed a potent MDM2 degrader, MD-224, which targets MDM2 to CRBN for degradation. MD-224 effectively and rapidly degrades MDM2 in leukemic cells. Notably, the analog of MD-224, MG-277, degraded MDM2 and induced efficient inhibition of tumor cell growth in a p53-independent manner.

In 2008, Crews group designed a PROTAC, consisting of an AR antagonist and nutlin-3, which recruits MDM2 to target the androgen receptor (AR). In 2019, they reported another MDM2-based PROTAC targeting BRD4, A1874, which not only degrades BRD4, but also stabilizes p53 thereby exhibiting potent anti-proliferative effects in a variety of tumor cell lines. In 2018, the PROTAC targeting PARP1 were reported, which consisted of PARP1 inhibitor niraparib and nutlin-3, showing substantially higher anti-proliferative activity than PARP1 inhibitors.