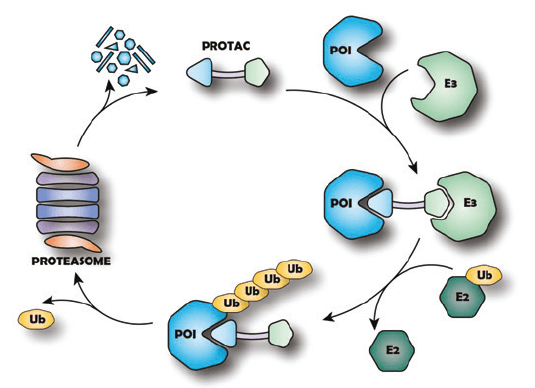 Schematic diagram of the mode of action of Protacs (source: Royal Society of Chemistry)

In March 2019, Nature reported that protein degradants based on Protacs technology will become the next blockbuster drug. In the past two years, research in academia frequently yielded results related to Protacs. In the pharmaceutical industry, drug research and development based on this technology has become a new focus. Enthusiasm for Protacs are ranging from start-ups to pharmaceutical giants. What is worth mentioning is that with the disclosure of positive phase I clinical data of ARV-110, the world's first small molecular protein degrader based on Protacs, confidence in the clinical transformation of this technology has greatly increased.

Recently, a monograph entitled "Protein Degradation with New Chemical Modalities: Successful Strategies in Drug Discovery and Chemical Biology" and edited by Professor Craig Crews of Yale University, a pioneer of Protacs technology, and Hilmar Weinmann, a scientist at Janssen Pharmaceuticals, has been officially released. The book, with 15 chapters and 359 pages, provides a comprehensive overview of the recent research progress from leading scientists in the field and some of the present challenges.

Targeted degradation of proteins by small molecules is one of the most exciting small molecule therapy strategies in decades, and it is also a rapidly developing research field. In particular, the development of Protacs has opened up a new way to target proteins that are traditionally difficult to target. This book would be ideal for researchers in the fields of drug development and chemical biology.

In the first chapter, Professors Craig Crews, Hilmar Weinmann, and Bayer scientist Philipp M. Cromm reviewed the development of Protacs and discussed the optimization of Protacs and whether the targeted degradation mediated by this technology can change the paradigm of drug development.

The article pointed out that from the publication of the first proof-of-concept study in 2001 to the first clinical trial of Protacs in 2019, this technique has developed into a chemical biological method and a new treatment.

In terms of target selection, in addition to the previously mentioned targets such as AR, ER and BRD4, a large number of proteins have become the choice of researchers in the field of Protacs since 2001. The following table summarizes most of the reported Protacs targets and corresponding E3 ligases in chronological order.