Protac®'s discovery began in 2001, when Dr. Raymond Deshaies of the California Institute of Technology and Professor Craig Crews of Yale University described a peptide-based Protac® in a PNAS paper. However, this generation of Protac®, based on large and bulky peptides, is less active in human cells, and Professor Crews and his colleagues have been improving the technique ever since. In 2008, crucial progress was made in the field of Protac® when Professor Crews's team reported on the first small molecule Protac®. They designed a small molecule degrader based on the E3 ligase MDM2, which can be used to degrade the androgen receptor (AR). This discovery is an important turning point in the development of this field, and since then, the number of disease targets that Protac® technology can target has increased at an alarming rate.

In order to promote small molecule Protac® technology to clinical practice, Professor Crews established Arvinas in 2013. After the establishment of Arvinas, C4 Therapeutics, Kymera Therapeutics and other new companies have been established, which are committed to exploring the therapeutic potential of small molecular protein degradants. In 2019, Arvinas's oral small molecule Protac® ARV-110 targeting AR became the first protein degrader to enter clinical trials. This is another milestone in this field and represents a key step in the direction of Protac® technology in the direction of proprietary medicine. Soon after, the small molecule PRORAC (ARV-471) targeted by Arvinas targeting ER also entered the clinic.

With the release of positive phase I clinical results by ARV-110 and ARV-471, the popularity of the Protac® field continues to rise. in addition to more and more start-ups joining the competition in this track, pharmaceutical giants (such as Roche, Pfizer, Bayer, Merck, GSK, Novartis, AstraZeneca, etc.) also make no secret of their enthusiasm for PRORAC technology. In China, dozens of enterprises have laid out Protac® technology, among which Hisco's oral BTK-Protac® (HSK29116) and external use AR-Protac® (GT20029) have been declared for clinical use.

In fact, after more than 10 years of accumulation, the scientific community and industry have developed thousands of Protac® molecules. Not long ago, a research team from Zhejiang University proposed an open database Protac®-DB based on Web in an article published on Nucleic Acids Research. The library contains more than 1600 Protac®, more than 100 targets, more than 200 target protein binder, more than 60 E3 ligase ligands and more than 800 linker.

The forefront of Protac® molecules

Jay Bradner, co-founder of C4 Therapeutics, said that Protac® has received a lot of attention in recent years because these new drugs have its unique advantages, including:

At present, the development of Protac® drugs has entered a new stage, the clinical pipeline is expanding rapidly, and many companies are pushing candidate molecules to clinical development. According to the latest Nature report, at least 15 protein degradants (Protac® and molecular glue) will be tested in patients by the end of this year. These projects are mainly targeted at cancer indications, ranging from validated targets to those previously thought to be difficult to make drugs (table below). 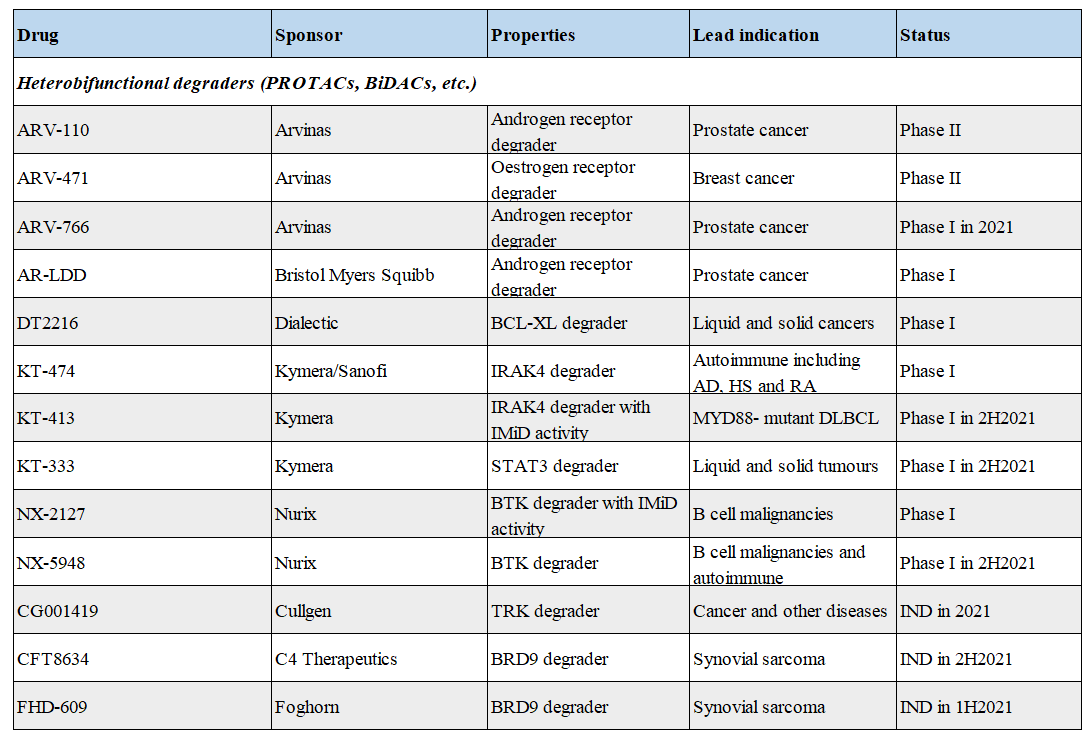 AR is not only one of the most popular targets in the field of protein degradation, but also the first clinical target of Protac® molecule (ARV-110). Many companies and institutions choose AR as a target because AR is a proven target at first, with a number of drugs approved for sale (including flutamide, which was first approved in 1989, and Enzalutamide, which was later listed). Second, patients develop resistance to existing AR inhibitors, and AR degradants are likely to overcome this resistance. Protac®-DB contains more than 1600 Protac® molecules, of which 107are targeted AR.

BTK is another hot target in the field of protein degradation. This is also a proven target. FDA approved the first BTK inhibitor, ibrutinib, in 2013, with sales of nearly $10 billion last year. Compared with traditional small molecular inhibitors, BTK-Protac® is also expected to solve the problem of drug resistance. Protac®-DB contains more than 1600 Protac® molecules, of which 84 are targeted AR.

Some proteolytic agents for difficult drug targets are also under development, such as IRAK4. IRAK4 is a kinase that activates IL-1 family receptors and Toll-like receptors (TLR) inflammatory signals. Although IRAK4 is associated with arthritis, atherosclerosis, Alzheimer's disease, gout, systemic lupus erythematosus and psoriasis, drug developers have only recently made progress in the development of small molecule drugs targeting IRAK4.

One reason for blocking the development of IRAK4 inhibitors is that the protein provides stent function in addition to kinase activity. After blocking its kinase function with IRAK4 inhibitors, IRAK4 can still rely on stent function to "protect" the myddosome complex and promote downstream inflammatory signal transduction. Although some companies, including Pfizer, are still developing IRAK4 inhibitors, Kymera, who developed IRAK4-Protac®, whose main indications for KT-474, include atopic dermatitis and suppurative hidrosis, believes that IRAK4 degradants will provide a better way out. Protac®-DB contains more than 1600 Protac® molecules, of which 24 are targeted IRAK4.

The difficult target that C4 Therapeutics is overcoming is BRD9. BRD9 is a member of the protein bromine domain family. Proteins containing bromine domains can recognize acetylated lysine on histone and other proteins. Over the past decade, they have attracted considerable attention in the industry because of their proprietary medicine pockets and a range of biological functions, including as epigenetic "readers". Some new findings reveal that BRD9 plays a key role in a rare sarcoma, which may be driven by its stent function, and the exact biology is still being studied. Although small molecules can bind and inhibit the bromine domain of BRD9 with high selectivity, the use of BRD9 inhibitors to kill cancer cells has not achieved good results. A paper published in 2018 showed that BRD9 degradants could prevent tumor progression in a mouse model of synovial sarcoma. Protac®-DB contains more than 1600 Protac® molecules, of which more than 50 are targeted BRD9.

C4 Therapeutics plans to submit an IND application for CFT8634, a BRD9 degrader, later this year to open a phase I clinical trial of the candidate molecule. It is reported that no company or organization has announced that BRD9 inhibitors have been introduced to the clinic.

In addition to Protac®, scientists have also found that a class of small molecules called molecular glue can also successfully induce the degradation of target proteins. To put it simply, molecular glue degradants are a kind of small molecules that can induce a new interaction between E3 ubiquitin ligase substrate receptor and target protein, resulting in the degradation of target protein. Thalidomide anticancer drugs (including lenalidomide, with sales of more than $12 billion in 2020) are a striking example of molecular glue, which redirects E3 ubiquitin ligase CRBN, to polyubiquitin transcription factors IKZF1 and IKZF3, resulting in proteasome degradation of IKZF1 and IKZF3. Similarly, the anticancer sulfonamide drug indisulam can induce E3 ubiquitin ligase DCAF15 to degrade splicing factors RBM23 and RBM39.

Some people in the industry say that the ideal Protac® is actually made into “molecular glue”. Because molecular glue has a better prospect than Protac® in molecular weight and pharmacological activity.

In addition to targeting proven targets (such as IKZF1/3), the industry is also developing molecular adhesives targeting new targets, such as Helios (IKZF2) and GSPT1. Helios (IKZF2) is a zinc finger transcription factor that plays a role in immuno-oncology signal transduction and is an attractive cancer target. Phase I clinical trials of Helios (IKZF2) molecular glue degrader DKY709 developed by Novartis as a single drug and in combination with Novartis’s PD-1 antibody DR001 in the treatment of advanced solid tumors are under way.

CC-90009, which is being developed by BMS, is a molecular glue degrader targeting GSPT1. GTP enzyme is difficult to target, because the intracellular concentration of GTP is very high, and the GTP binding bag binds strongly to GTP enzyme, so it is difficult to develop compounds to compete with GTP. Celgene researchers reported in the journal Nature that they can use molecular glue degradants that redirect CRBN to degrade GTP enzyme GSPT1, and that patient-derived acute myeloid leukemia cells are highly sensitive to the drug. They then optimized a subsequent compound, CC-90009, to maximize the degradation of GSPT1 and minimize the degradation of Ikaros, Aiolos and other new substrates related to toxicity. CC-90009 entered phase I clinic in 2016.

“We have not only successfully degraded the targets of unproprietary drugs, but also brought clinical benefits to patients. This is so exciting.” Mark Rolfe, senior vice president of tumorigenesis at BMS, said.

CSO Stewart Fisher of C4 Therapeutics said that for Protac® and molecular glue, the next two years will be a key year to verify whether a drug can be made.